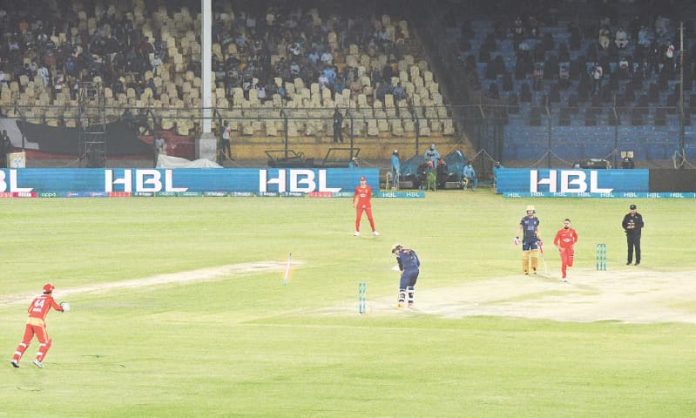 The result also came as a sigh of relief for Islamabad, who lifted the coveted trophy twice in 2016 and 2018, as they finally ended a four-match losing streak against Quetta when they reached the rather modest target of 157 in 17 overs after restricting their opponents to 156-7.

The sixth edition’s fixture — which was postponed on Monday after Islamabad United spinner Fawad Ahmed returned a positive Covid-19 test — was predictably won by the side winning the toss and fielding. And once Sarfaraz Ahmed called incorrectly when Shadab Khan spun the coin, the 12th result of runs been successfully chased down was never in doubt.

Despite Sarfaraz hitting up a pugnacious half-century, Quetta lost momentum at the backend of their innings and mustered only 56 runs in the final seven overs during which they managed a solitary six and one four, both being struck by Mohammad Nawaz (unbeaten 31 off 29 balls).

Paul Stirling then made short work of the listless Quetta bowling as the Ireland right-hander thrashed 56 from 33 deliveries — after racing to 52 in just 21 balls — while outscoring his more illustrious batting partner Alex Hales during their electrifying first-wicket partnership of 76 in 35 balls.

Both Hales (23 off 13 balls, five boundaries) and Stirling, who crunched eight fours and two sixes, fell to leg-spinner Zahid Mahmood, who was the only bright spot for the Sarfaraz-led Quetta side.

Rohail Nazir, the upcoming wicket-keeper/batsman, excelled on his PSL debut with a brisk 28-ball knock of 34 (four boundaries) until he attempted to go hard at Dale Steyn, but only managed to find Naseem Shah at mid-off before Asif Ali and Hussain Talat completed the final rites.

Low on confidence in terms of batting collapses after these teams had suffered the humiliation of recording the lowest two totals in this PSL — Quetta mustering 121 in the event’s opening game against Karachi Kings and Islamabad usurping that tally by being shot out for 118 versus Peshawar Zalmi — Quetta were looking for improvement on all fronts.

Not for the first time, Quetta were let down by their brittleness at the top of the order. And Tuesday was no different either when Saim Ayub — the emerging pick — failed to get going once again when the young left-hander cut Hasan Ali to Stirling at point in the opening over.

Cameron Delport had his off stumped plucked out of the ground by Faheem Ashraf — the undoubted star performer of the night with magnificent figures of 3 for 11 in his four-over stint that also saw the seamer delivered no less than 14 dot balls — before Hasan dismissed Faf du Plessis, trapped in front for 17.

And when Azam Khan departed for just four, caught by Iftikhar Ahmed off man-of-the-match Faheem, Quetta were in deep strife at 41-4 in the sixth over. Sarfaraz, however, was unwilling to throw in the towel and together with Mohammad Nawaz retrieved the position somewhat in partnership of 63 from 40 deliveries.

The highpoint of the match was when Sarfaraz — who had crossed the magical figure of 1,000 runs in PSL when he had scored four — bludgeoned Iftikhar for four sixes on the trot in the 13th over, but once he was declared LBW by Ahsan Raza for 54 (41 balls, three fours and four sixes), Quetta’s hopes of setting a tough target for Islamabad simply vanquished.

Sarfaraz seemingly looked unhappy at being adjudged leg before, while the DRS confirmed umpire Ahsan had been on the spot. Whatever transpired between them afterwards as Sarfaraz trudged off, the captain now can’t afford to relax as Quetta battle to stay in the hunt for playoffs as they prepare face Multan Sultans on Wednesday after the day fixture between Karachi Kings and Peshawar Zalmi.