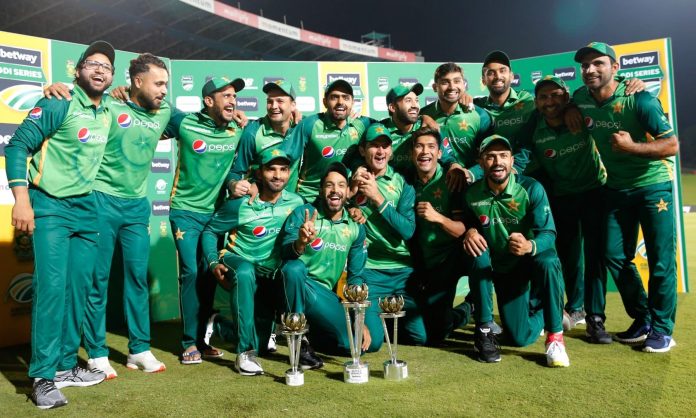 There was jubilation galore and the cricketing world and social media heaped praise on the Men in Green after Pakistan beat South Africa by 28 runs on Wednesday to become the only Asian side to win an ODI series twice in that country.

Pakistan clinched the series 2-1 in Centurion after opener Fakhar Zaman smashed his second century in as many matches, sealing his side’s victory in the third and final one-day international.

Fakhar followed up his scintillating 193 on Sunday with 101 as Pakistan posted 320 for seven in their 50 overs having been sent in to bat. His splendid knock was given a significant late boost by captain Babar Azam (94 from 82 balls) and Hasan Ali (32 not out from 11) who smashed 55 from the final 16 balls of the innings.

South Africa, missing five key players on their way to the Indian Premier League in Quinton de Kock, David Miller, Kagiso Rabada, Anrich Nortje and Lungi Ngidi, were bowled out for 292 in the final over.

Cricket writer Saj Sadiq noted that this is only the second time Pakistan has won an ODI series in South Africa, having won the first series in 2013.

Former captain Azhar Ali termed it an “outstanding series win away from home”, and especially praised the leadership of skipper Babar Azam.

Imam in a tweet said it is “great to be part of this amazing team”, and congratulated his side on clinching the series.