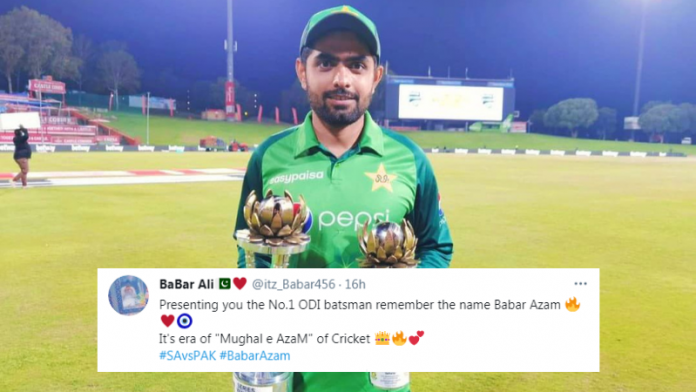 Pakistan cricket’s blue-eyed boy Babar Azam is expected to overtake Indian captain Virat Kohli to become the top rated ODI batsman in the world during the Pakistan versus South Africa match on Wednesday. While the ICC has yet to announce the rankings, the country has already started celebrations.

He scored 94 runs off 82 balls and led his team to a 28-run victory. Azam’s performance won him the man of the match award for the third ODI, as Pakistan settled the series with a 2-1 victory.

Azam, who is currently at 852 points, five behind Kohli, is expected to gain six points for the series against South Africa — with his ton in the first game, and 94 in the third — taking him above the Indian superstar cricketer when the ICC ODI batsmen rankings are next updated. Currently, Kohli stands atop of the un-updated rankings.

The captain took to social media to express his delight at the series win, dedicating his victory to Pakistan, and noted just how superbly teammate Fakhar Zaman played throughout the series.

Twitter, of course, felt there was no better way to celebrate than memes!

One user spotted the ushering of a new era in world cricket, terming it the ‘Mughal-e-Azam’ era.

This user had all heroes bow down to the hero of the hour.

Here’s something to contextualise Azam’s journey as a cricketer.

And here’s a montage for the hero from across the border.

ESPN Cricinfo shared some on field humour as they found it difficult to differentiate between the two sides’ green jerseys.

With all that we’ve accomplished from this ODI series as a national team, it is time to look forward and not forget that there’s a T20 series right around the corner!