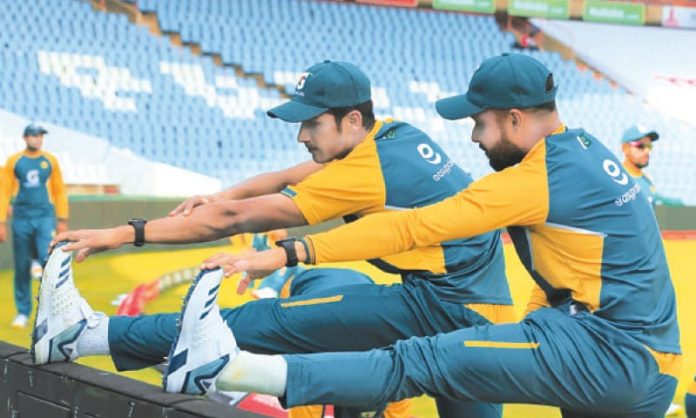 CENTURION: Just three days after Fakhar Zaman’s incredible innings of 193, South Africa and Pakistan prepare to do battle in the One-day International series decider at the SuperSport Park in Centurion on Wednesday.

South Africa withstood a record-breaking innings from Fakhar on Sunday at the Wanderers in Johannesburg during the second ODI to keep their hopes of a series victory alive. After losing the series opener by three wickets in Centurion last Friday, the hosts bounced back to win game two by 17 runs despite the best efforts of the swashbuckling Fakhar.

Fakhar hit an incredible 18 fours and 10 sixes in his innings before falling seven runs short of becoming the second player to have scored multiple ODI double-centuries. Keeping the big-hitting left-hander quiet will be key to South Africa’s hopes of claiming the series.

Conversely, Pakistan will be hoping for a more rounded effort with the bat after Fakhar was left to carry the chase in the second match where captain Babar Azam (31) was the only other batter to score more than 20 runs.

Both sides will be missing key personnel for the decider. Spinning all-rounder Shadab Khan has been ruled out of the remainder of the tour with a toe injury while South Africa will be without a host of stars who have departed for the Indian Premier League.

With the bat they’ll be without star opener Quinton de Kock and the hard-hitting David Miller and with the ball all three of Kagiso Rabada, Lungi Ngidi and Anrich Nortje have departed.

Captain Temba Bavuma implored his team to look to it as an opportunity rather than a setback.

“We’ll go into the [final] game wanting to win the game and fortunate or unfortunate that we don’t have our main players available, the IPL boys,” Bavuma said. “At the same time there is an opportunity for the guys on the fringes to really make a play for the team.”

For both teams, the match presents the opportunity to move up the Cricket World Cup Super League standings.

South Africa currently sit 11th in the Super League with nine points. A victory would seem them leapfrog Ireland and Zimbabwe to ninth on the standings. Pakistan are fourth right now with 30 points and can move as high as first if they win this match convincingly.

The Johannesburg clash was a high-scoring encounter that saw four South Africans pass 50 without bringing up a ton and one Pakistani pass 150 but cruelly fall short of a double-century.

Sent out to bat, the Proteas belted an imposing total of 341-6 from their 50 overs, with de Kock (80) and Bavuma (92 providing the bedrock of the innings before some free-spirited hitting from Rassie van der Dussen (60) and Miller (an unbeaten 50) took them within touching distance of 350.

It took something special from Fakhar to keep Pakistan even remotely in the chase.

The tourists lost wickets regularly throughout their innings as Rabada (1-43 off 10 overs) and Nortje (3-63 off 10) turned the screws.

Both captains expect the series finale to be a cracking encounter with Bavuma saying: “The two games have gone down to the wire, it’s been an incredible experience.”

Babar, meanwhile, was still contemplating what might have been if Fakhar had found decent support from his batting partners at the Wanderers.

“Fakhar’s innings was simply fantastic, but unfortunately he couldn’t finish it. I think if he had a few other batsmen standing by with him, we would’ve won the series. We made mistakes but we will try to fix them in the final game,” the Pakistan skipper said.